We all have our own personal identity and we express it in different ways. Whether that’s through a signature hair style, the clothes that we wear or even the music we listen to. But when it comes to having a ‘brand’ for our family, what can we opt for?

Across the world there are thousands of prestigious families who have made a name and a memorable image for themselves.

Usually linking back to historical ties, these esteemed families create ‘crests’ – otherwise known as a full coat of arms, the crest literally sits on top of the design.

Historically, these crests were often used to adorn a knight’s helmet, and were occasionally used in place of the family’s whole coat of arms in order to keep things simple.

However, these crests are far from simple!

They almost always include a shield of some description, as well as several basic components including the mantling, the helm and the wreath. Some even have colours, animals or other artwork and sayings.

Crests are also often incredibly ornate, made to stand out and represent these families in the most respectable way possible.

To celebrate these works of art, and the centuries of history behind them, we took a closer look at family crests from around the world and the country with the most crests.

Our findings revealed France to be the number one country in the world for the most family crests!

The multi-cultural European country has recorded a whopping 3937 crests belonging to a variety of families and royals. A more simple crest within France belongs to the family of Thais – whose crest is a basic shield shape with three white stripes and two blue stripes.

Poland came second, being home to 3423 crests, with the majority being overly decorative and ornate.

The oldest known crest is the seal of Żegota, the Kraków voivode. First used in 1282, this coat of arms was used by 639 Polish noble families and features two axes, a knight’s helmet and the colours of the Polish flag.

The country of Spain has 3078 family crests, including a unique design crest of three heads across a shield, for the Armas de Rebuelta.

The top ten countries for having the most family crests: 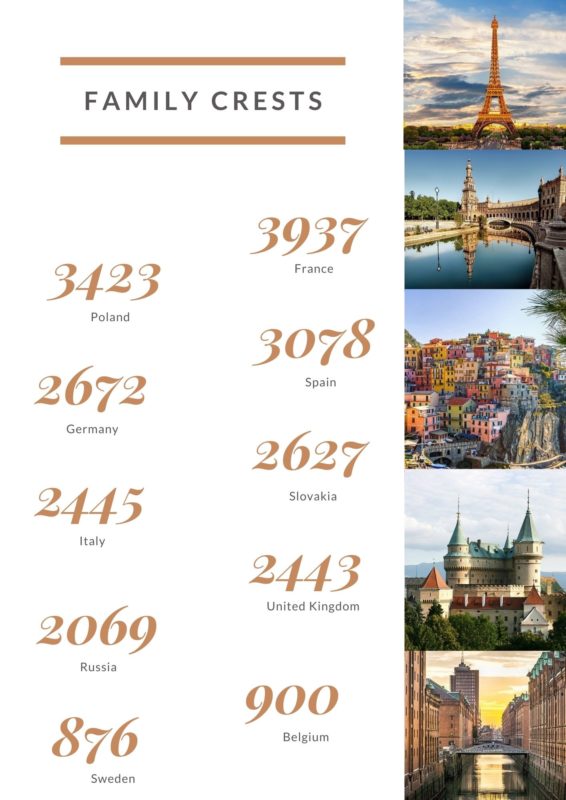 Interestingly, these top ten countries with these rich histories are all within the continent of Europe.

Keeping things magical, Germany has an entire collection of family crests that include a unicorn! 17 of the 2,672 crests include the mythical creature, with the Kingdom of Hanover’s crest’s unicorn sharing the stage with a crowned lion.

Central Europe’s Slovakia also has unicorns featuring on many of its family crests, but the actual country’s coat of arms is, unfortunately, missing the stunning horse. Instead, it has a gothic style double cross embossed on a shield, and has been used by the country since 1990.

The culturally and historically rich country of Italy naturally has plenty of interesting crests. Some are incredibly ornate, sporting the usual fantastic creatures and decorative shields, but many of Italy’s family crests are more simple. The crest of Stemma della famiglia Alasia is a half grey and half black simple shield shape, with no other elements.

Russia has their own unique version of family crests too, with some of the oldest crests simply being a fine line symbol. That’s a stark contrast to the heavily detailed and extravagantly designed crest of the Russian Empire!

We also took a deeper look at the history behind the UK’s family crests, across all four countries.

The UK has a long history, dating back to around 325BC, as Pytheas of Massilia wrote of his discovery of the island. And in that time, the UK has been home to thousands of prestigious families and an iconic monarchy.

Thanks to this detailed history, our island has a huge collection of crests. We found that England alone has 2443 crests, with the earliest conception of a crest being recorded in 1127. However, it wasn’t really much of a crest we’ve come to know today.

Count Geoffrey of Anjou was given a ‘crest’ by King Henry I, who presented the Count with “a badge” decorated with a lion – quite a simple design by today’s standards.

Especially in comparison with today’s royal coat of arms, a crest that features two lions, a unicorn and the crown jewels. Along with the motto of English monarchs, Dieu et mon droit – meaning God and my right.

1131 of the UK crests we found were Scottish, relating to their prestigious families, or ‘clans’. These clan crests are usually described as a badge, with the main shape being circular, and the inside element changing depending on the clan it represents.

Traditionally, the badge’s main element will be a plant. For example, the last name Buchanan’s clan will usually feature an oak, and MacDonald will be a common heath.

Elements of these clan badges will change slightly depending on the family it belongs to.

One of the most famous clans in Scotland, the Campbell Clan, has a crest featuring a boar’s head. It’s circled by a belt and the motto ‘Ne Obliviscaris’ meaning, ‘forget not’.

Northern Ireland’s own crest features a six pointed star and an Imperial crown between a lion and an Irish elk. Crests across Northern Ireland normally feature the surname of the family in the Irish language.

Welsh crests make up just 56 of the UK’s family crests, but that doesn’t mean the country lacks in history. Historians have found evidence that heraldry was already prominent in Wales by the middle of the 13th century!

And it doesn’t just stop at their iconic Kingdom of Gwynedd crest of four lions within the shield, used by the Princes of Wales. The country has the quartered arms of Hughes of Gwerclas.

This crest includes a snapshot of a variety of other Welsh family crests, giving us an overview of Welsh heraldry. It includes the crest of Lord of Gwyddelwern, Lord of Nannau, Lord of Ges and the Lord of Iscoed – all prestigious names in Welsh history.

But what’s your family crest?

Well, with a few minutes of your time, and a good idea of your family tree, there are many online resources that can help you track your family crest down.

And if you can’t find one – make one! Create your own family motto too, and surprise your family members with a personalised gift sporting your very own motto to live by.

If you fancy going the extra mile and adding a crest, we have our very own database to help you design the perfect gift!

Our family crest gift range means you can enjoy a tipple, hold your cards and cash, nibble on a snack and even open a letter, all whilst appreciating your family’s heritage.

Win a gift with your own family crest

Simply fill the below form!