Naming your new bundle of joy is one of the most exciting things you can do as a parent, but it can also be one of the most daunting. There are so many baby names out there, how can you possibly decide which name is ‘the one’?

Naming your children after geographical locations isn’t a new thing, but with the rise of celebrity location based baby names like Brooklyn, Kingston and Chicago, they have definitely become a more popular way to name a little one.

Here at GiftsOnline4U, we wanted to find out which capital city baby names proved the most coveted, so we dived into the Office for National Statistics’ data, showing England and Wales baby names used between 1996 and 2018, and looked into those that match capital cities’ names.

The UK’s love of city based baby names

In the UK, we’ve always been fans of naming our children after the places we love. Some people have a unique bond with the city, or some just love the name. Some of the most popular, and names that we now see as perfectly ordinary, are:

At one point these beautiful city names were seen as unusual or quirky, but now they boast between 1000 and 20,000 namesakes in the UK alone.

We wanted to find out what new capital city names were making a debut and see if we could spot any clues as to why certain names were more popular in specific years. Our research showed that the 10 most popular were: 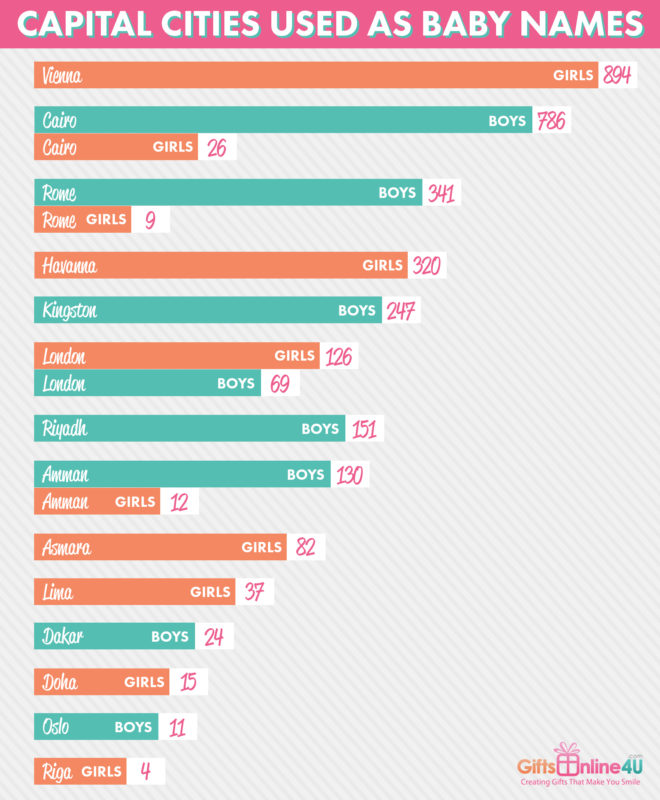 As we looked into the city baby names, we realised that there were a few that could be pinned to specific world wide events. People love to feel nostalgic, so what better way to mark a happy occasion, then with another happy occasion?

One of the main capital city names we saw a spike for, was the name ‘London’. Back in 2012-2013, ‘London’ saw a rise in popularity amongst new parents. It was deemed a unisex name, with both boys and girls being gifted with the title. In those two years, the name ‘London’ was used a total of 59 times, with 41 of those being given to baby girls.

The beauty of this name at this time, was that it perfectly matches up with the 2012 Olympic Games, which was held right here in the UK in London. Babies conceived or born around the Olympics now have a lifelong reminder of the excitement that was being felt across the UK during that time.

Why choose a city as your baby name?

Naming your baby after a city has its advantages. Not only does it give them a unique and interesting name, you can also use it for nostalgic reasons or even to mark a place that is special to you.

One of the most common reasons for city baby names is that something happened in that city that holds a great deal of emotional connection for parents. It may be that it’s the place where they tied the knot, went on their honeymoon or maybe even the city they met in.

Whatever their reasons, there is no denying that having an uncommon city name can be a beautiful gift for any child and one they can talk about for the rest of their lives.