Aston Villa is a hugely successful club. Winning the FA Cup seven times, League Cup five times, and the European Cup once, Villa’s history is a grand one. With our personalised Aston Villa gifts, create lasting memories and celebrate a special occasion in style. 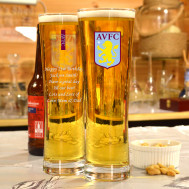 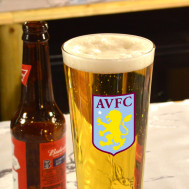 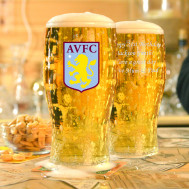 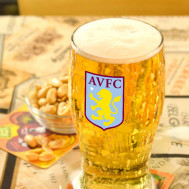 Based in Birmingham at their home ground of Villa Park, Aston Villa Football Club is a regular in the Premier League. Having spent most of its history in the top division, they are one of the top teams in the country. The 1890s were their most successful period, winning the First Division five times and the F.A. Cup three times in this decade. The standout player at this time was John Devey, who was their top scorer 6 times. 1897 was an important year for Villa. Winning the double and moving into the iconic Villa Park.

In the early to mid-1900s, they had ups and downs and were unfortunately relegated more than once, until 1960, when they became the first team to win the League Cup. In the 1970s, things improved, and they became league champions again in 1981. In 1982, they won their only European Cup, beating Bayern Munich 1-0.

Villa was in the top division for every season until 2016 when they were relegated to the Championship. They beat Derby County 2-1 in the 2019 Championship Play-Off final to return to the Premier League.

A great gift idea for Aston Villa fans is a personalised wallet. With a loved one’s name printed directly on to it; there is no better way for them to show off their support in style while carrying a useful, sentimental keepsake.

Download Our 50 Questions To Ask Your Wedding Venue Before Parting With Your Cash
Thank you for visiting our site. We need to let you know that this site uses cookies. By continuing to browse, or by clicking “OK,” you agree to the storing of first and third-party cookies on your device to enhance site navigation, analyze site usage, and assist in our marketing efforts to bring you a more tailored experience.
More info Accept