Rangers are one of the two biggest clubs in Scotland. They are the second most successful team in the world in terms of trophies won, with 55 league titles, 33 Scottish Cup wins and countless other trophies in their history. Let any fan celebrate with our personalised Rangers gifts, whether for a partner, dad, child or a friend. 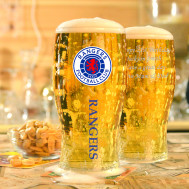 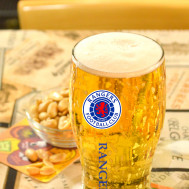 Unique Rangers Souvenirs for Him

Rangers were formed in 1872, by four founders. They became one of the 10 founding members of the Scottish Football League in 1890. They finished joint top and the title was shared for the only time in the league’s history. They won two league titles and three Scottish Cups by the end of the 19th century.

In 1920, Bill Struth took over and in his 34 years in charge, became Rangers’ most successful manager. They won 14 league titles before the start of the Second World War and by 1954, had won 18 league championships, 10 Scottish Cups, two League Cups, and many other honours.

For the next half-century, the blues of Glasgow were extremely successful, and in 1997, won the league for the ninth time in a row. Since then, they have competed in the Champions League many times and won multiple domestic trophies. Unfortunately, they went into administration in 2012 but have since bounced back with force and are back to dominance.

A great gift idea for younger fans is our personalised Rangers gym bag. A blue drawstring sack with a white stripe and the iconic Rangers crest, add a loved one’s name to make them the attention of all their friends. Let them carry their school supplies around in style while showing their support.

Download Our 50 Questions To Ask Your Wedding Venue Before Parting With Your Cash
Thank you for visiting our site. We need to let you know that this site uses cookies. By continuing to browse, or by clicking “OK,” you agree to the storing of first and third-party cookies on your device to enhance site navigation, analyze site usage, and assist in our marketing efforts to bring you a more tailored experience.
More info Accept